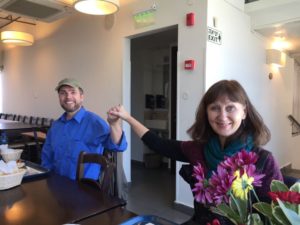 Question 1: When and how did you get saved?

P. Antti: As a young man, I witnessed an good friend of mine coming to Christ at a confirmation camp. I saw his peace, and it spoke volumes to me. Having peace was also his own testimony after becoming a believer. So, the seed had been sown in my life. Later on, in 1985, I attended a classical music camp. Then I had my New Testament with me, given to me by my confirmation teacher a few years earlier. I read it, knelt down and asked God to give me a living faith. He did and I received Christ as my Savior.

Paula: As a young girl, I heard the truth about God and the Bible from my born-again nanny. I believed, but I didn’t know whether I was saved or not. In 1985, an old friend from school invited me to a women’s seminar arranged by the Raamattu Puhuu Church in Helsinki, Finland. During the seminar, I made the decision to accept Jesus as my personal Savior. Perhaps, I was already a child of God since I had more or less always believed, but this was a turning point in my life. My parents, who were not believers, said that “finally we have a happy Paula”.

Question 2: What do you think makes Greater Grace unique?

P. Antti: Initially, I came in contact with some believers who were part of a “Brethren fellowship”. One believer from that group brought me to the Greater Grace church in Helsinki. He thought the church had something to offer a new and hungry believer like myself. It was the drawing of the Holy Spirit and the desire to have genuine Bible teaching that motivated me to search for a church that would satisfy my spiritual thirst.

What impressed me in the Helsinki church was the dynamic preaching of the Word of God, but also a deep understanding of grace and “grace life”. It was obvious that people had a real desire to learn and grow. Finally, “body life” stood out to me as a unique characteristic of the local church as well as the ministry as a whole.The whole ministry was like a family. Paula nods in agreement to pastor Antti’s testimony.

Question 3: What are your hopes and desires for the future concerning our ministry?

P. Antti and Paula: “Now we have received, not the spirit of the world, but the Spirit which is of God; that we might know the things that are freely given to us of God.” (1 Cor 2:12) We desire to freely pass on what has freely been given to us by God. We dream about growing together as unique members of Christ’s Body, with no restrictions or borders between any of the groups making up our local assemblies worldwide. The challenge of the time that we live in, perhaps partly due to internet and advanced technology, is for people to be very independent. Therefore, we need a spirit of humility. Divine unity among us is certainly high on our “spiritual list of desired things”. Referring to a recent message from dr.Ben, we want to enter into the same desires that God has: for His house, the Body of Christ to be built, nations to be reached, and prayer for His beloved Israel to be blessed and saved.

Question 4: Why did you choose to go to Israel?

P. Antti and Paula: Our testimonies here are completely synchronized. In other words, we received this calling very much together, given to us step by step by the Holy Spirit. As a young believer, P. Antti says, I had many friends who loved Israel. There were also several Messianic believers who visited Finland. We loved to meet them and listen to them.

In 2007, Päivi Taskinen arranged a tour to Israel. At that time, we did not really think about going there, at least not for any longer period of time. However, when we arrived in the Holy Land, we immediately felt at home. Dr. Ben used to come to Finland and speak in various meetings arranged by friends of Israel. In 2008, in one of those meetings, God spoke to our hearts about going there. As a result, we wanted to test the calling and to begin with we spent a month in Israel in 2010.

Since then, we have spent much more time in the country. In 2014-2015, we stayed nine months in Israel, partly studying Hebrew in a private language school. The time in Jerusalem created a desire for more of the same. Therefore, in 2017-2018, we returned for one year for more Hebrew language studies, this time at the Hebrew University in Jerusalem. Our hearts are still partly in Israel and we are hoping and praying that we will be able, the Lord willing, to return to the Promised Land some day.